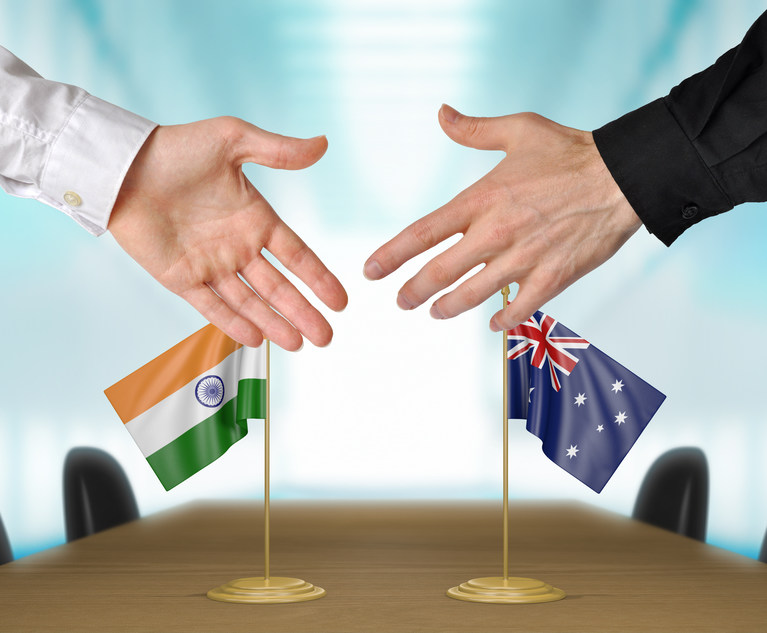 A trade pact between Australia and India is in the works. Will Australian lawyers take action?

Australia and India have reignited talks on a free trade agreement that would liberalize and deepen their bilateral trade, and lead to a corresponding increase in work for law firms.

The India-Australia Comprehensive Economic Cooperation Agreement (CECA) would reduce tariffs on goods and further facilitate trade between the two countries. And if the monetary thresholds for which Indian investments in Australia require regulatory approval are increased, the trade deal will make room for even more investment and more legal work, said Samy Mansour, partner at Australian firm Clayton Utz.

Trade in goods and services between Australia and India was valued at almost $18 billion in 2020, including around $11 billion of Australian investment in India. According to data from the Australian Department of Foreign Affairs and Trade, the value of 2020 was to double that of 2007.

Which law firms have everything to gain?

Over the past 18 months, most of India’s biggest M&A and investment deals, including the merger between Japan’s Sony and India’s Zee Entertainment to create a mega TV network; the Tata Group’s acquisition of flagship carrier Air India; and Blackstone’s widely held investments in companies such as Indian technology company Mphasis, have been either domestic or led by Western investors. Similarly, international firms like Clifford Chance, Simpson Thacher & Bartlett, Latham & Watkins and DLA Piper topped the rankings as top foreign legal advisers on transactions involving India, according to Mergermarket Asia Pacific ranking reports. .

Australian businesses can also expect to benefit from more deals under the trade pact. But lawyers warn that this won’t necessarily be the benefit they’re hoping for. They will continue to face significant competition from UK and US law firms which have offices in Australia and are better established in India’s legal market, they say.

“There will be a good amount of bridges needed because the way Australian and Indian businesses operate and approach risk and value are very different,” said Amit Kapur, co-manager of Indian firm J. Sagar Associates. “For Australian companies to succeed, they will need to converge with Indian companies. Ultimately, it’s all about that – the comfort of the investor knowing that there is someone who can advise on both fronts and steer [the deal] by.”

Much of India’s inbound investment to Australia so far has centered on coal mining and international education, although the education sector has been diminished by travel bans resulting from the COVID-19 pandemic. There’s also growing interest in the tech space, said Mansour, who recently helped tech giant Infosys with its acquisition of a digital consulting firm in Australia.

According to the Government of India’s webpage on Australian investment in the country, Macquarie Bank, ANZ Bank, Wesfarmers Limited, BHP Billiton and Telstra are among the largest Australian investors in India.

Last year, Telstra expanded its presence in India by establishing two innovation centers in Hyderabad and Pune, as well as a product engineering lab in Bangalore.

But Australia’s investment in India is dwarfed by China, the country’s second largest trading partner. after the USA Admittedly, China is Australia’s largest trading partner, accounting for more than a quarter of the country’s total trade. Bilateral trade between China and Australia totaled $180 billion in 2020. And bilateral trade between China and India grew rapidly: it jumped 43.3% year-on-year, reaching 28.14 billion dollars in 2021.

Both India and Australia see CECA as a vehicle to rebalance their investment portfolios and reduce their reliance on trade with China, which they would both like to see happen. China’s strict COVID-19 policy has strained trade flows globally, severely disrupting supply chains. The Chinese government’s recent crackdown on data-intensive tech companies and overseas-listed Chinese companies has also spooked investors around the world.

For India, the CECA could trigger a wider range of investment from Australia, the lawyers say.

In 2019, India launched its five-year National Infrastructure Pipeline, a government plan to improve infrastructure and attract investment in the sector. Last year, the country also launched its National Monetization Pipeline, an initiative to monetize public sector brownfield assets to raise about $81 billion over four years.

“It’s an area that Australians need to come and think about,” Kapur said. “They’re resource-rich; they’re strong in engineering, and in some ways they also have the same common law approach to contract management.

But lawyers say that even with CECA, increased trade and investment won’t happen overnight.

According to Kapur, Australian investors sometimes find it difficult to enter the Indian market, despite their interest, and fail to accurately assess the return on investment they can expect due to a lack of understanding of regulations and market policies regarding foreign investment.

The CECA, as it stands, does not address these issues, he said.

“These facets have not been addressed much in the [CECA] business pact, and we haven’t really reached the level where people have already started talking and engaging and looking for opportunities,” he added. “Unless we go that far, we’re still a few steps away.”

Anne Petterd, Sydney-based Asia-Pacific president for Baker McKenzie’s international sales and business team, says she expects the free trade agreement, when it comes into effect, have a gradual rather than immediate impact.

“In my experience, free trade agreements, at least initially, do not bring immediate results. But especially on the investment side, they are good facilitators,” she said.

“What this will definitely do is increase the search for opportunities,” she added. “And once someone breaks the ground and does something, others tend to follow suit.”

Bucks County must unite to ‘ban the bomb’