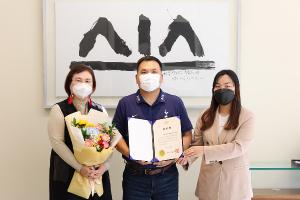 AIA Korea announced on November 3 that it had won the Seoul Mayor’s Award at the 2021 Seoul Welfare Competition.

AIA Korea received the award through the sincere and constant support of its Nanumi (“sharing people” in Korean) employee volunteer club through a variety of corporate social responsibility (CSR) activities.

Since August 2010, AIA Korea’s Nanumi Club has hosted annual summer camps for children and adolescents with severe cerebral palsy in partnership with the Seoul Welfare Center for the Cerebral Palsied. AIA Korea has not only covered 100% of the running costs of the camps for the past 10 years, but its executives and staff have also participated in the camps with their family members with the aim of raising disability awareness while strengthening the commitment.

In addition, AIA Korea has carried out various CSR activities to support the physical fitness and emotional well-being of people with disabilities. The company has organized football camps for children and adolescents with disabilities, with coaching sessions provided by Tottenham Hotspurs, the Premier League football club, including its South Korean player Son Heung-min. He also supported the opening of a new gym at the Seoul Welfare Center for the Cerebral Palsied by replacing obsolete exercise equipment.

AIA Korea CEO Peter Chung said, “We are delighted to receive this award in recognition of the volunteer work of AIA Korea, made possible by the strong contributions of our executives and employees,” and added, “We will continue to carry out a variety of CSR activities for various members of our society, including vulnerable social groups, so that they can live healthier, longer and better lives.