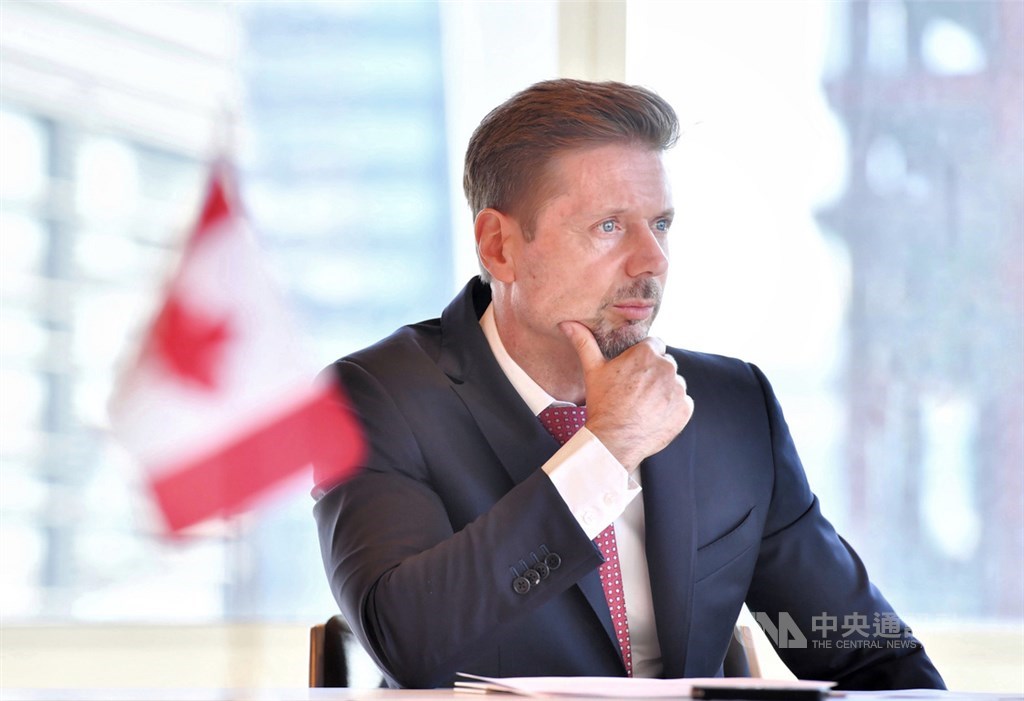 Taipei, Dec 25 (CNA) Canada’s de facto Embassy is celebrating its 35th anniversary in Taiwan this year, after witnessing the country’s democratic transformation as part of growing cooperation between Ottawa and Taipei in several areas, told the CNA the main Canadian envoy to Taiwan in a recent interview.

The Executive Director of the Canadian Trade Office in Taipei (CTOT), Jordan Reeves, said 2021 marks the 35th anniversary of the opening of the CTOT, which represents Canada’s interests in Taiwan in the absence of official diplomatic relations.

“This year, we are celebrating the 35th anniversary of CTOT, but we are also celebrating Taiwan’s successful transition to a high-tech democratic society, as this has certainly contributed to the richness and diversity of our interpersonal relationships today. Reeves said.

In 1986, CTOT opened with just three employees and a mandate to support bilateral trade and Canadians living in Taiwan, according to Reeves. The office was originally co-located with the Canadian Society, the forerunner of the Canadian Chamber of Commerce in Taiwan.

“At the time, there were no direct flights to Canada, bilateral trade was only C $ 1.6 billion (US $ 1.23 billion) and of course Taiwan at that time was still under martial law, ”he said.

Taiwan has changed a lot since then. It has become a democracy, with its first direct presidential election held in 1996, the envoy said.

“Taiwan has also made tremendous strides in gender equality, human rights, democratic governance, media freedom, in all of these areas, and has become a trusted friend and business partner for the Canada, ”he said.

In terms of two-way trade and investment, in the first nine months of 2021, trade was valued at C $ 7.5 billion. Since the office opened, Canada-Taiwan bilateral trade has grown 10% per year, according to Reeves.

Today, three airlines offer direct Canada-Taiwan flights, although these services are currently suspended due to the COVID-19 pandemic.

Over the past three and a half decades, the two sides have signed 40 memoranda of understanding, in areas ranging from agricultural sciences to transport and security, of which 28 are still in place, he added.

“So you can say that our office expansion, size and responsibilities have also followed Taiwan’s transition to a vibrant and economically diverse inclusive society very closely,” Reeves said.

More recently, Canadian public health officials participated in discussions with Taiwan’s Ministry of Health and Welfare to learn from Taiwan how to better control and manage COVID-19, he noted.

Another area of ​​cooperation relates to Indigenous issues and the two sides have been organizing exchanges and collaboration between Indigenous leaders, policy makers and artists for two decades, according to Reeves.

Looking to the future, Reeves cited the findings of the latest round of the annual Canada-Taiwan Economic Dialogue held on December 14, in which the two sides pledged to continue to strengthen cooperation in the supply chain and d ” deepen bilateral trade and investment ties.

On supply chain cooperation, Canada and Taiwan announced their intention to undertake a joint supply chain study in areas of mutual interest.

The two sides also discussed the importance of holding a series of trade roundtables starting next year focused on electric vehicles, 5G, advanced manufacturing and other areas, according to a press release. of CTOT.

“We were therefore very interested in the potential opportunities for bringing together Taiwanese hardware and Canadian software. “

The envoy said that good collaboration can potentially provide Canadian companies with good access to some of Asia’s most dynamic and dynamic markets and vice versa.

According to CTOT, Taiwan was Canada’s 15th trading partner and sixth in Asia in 2020.