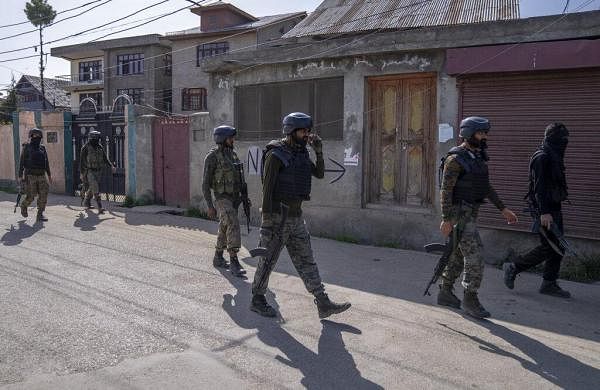 ISLAMABAD: The OIC Contact Group on Jammu and Kashmir said on Wednesday that lasting peace in South Asia cannot be achieved without a settlement of the Kashmir issue.

The group met on the sidelines of the 48th session of the Council of Foreign Ministers of the Organization of Islamic Cooperation (OIC) in Islamabad and was chaired by OIC Secretary General Hissien Brahim Taha.

India has previously denounced the 57-member group of Muslim-majority nations, saying bodies like the OIC should not make irresponsible statements.

In its joint communiqué, the OIC Contact Group emphasized that a lasting peace in South Asia cannot be achieved without a just settlement of the central Kashmir conflict in accordance with UN resolutions.

The members of the group reiterated their demand for India to reverse the unilateral measures taken on or after August 5, 2019.

Pakistan unsuccessfully tried to garner international support against India for withdrawing the special status of Jammu and Kashmir on August 5, 2019 and dividing it into two union territories.

India has told the international community categorically that the removal of Section 370 is its internal affair.

He also advised Pakistan to accept reality and stop all anti-Indian propaganda.

In the annex to the joint communiqué, the group called on OIC Member States to raise the issue of Kashmir in their bilateral engagements with India.

The Secretary-General and the General Secretariat have been invited to raise the issue of Kashmir and the peace and security, human rights and humanitarian dimensions during engagements with various interlocutors, including international, regional organizations and bodies and defense of human rights.

The Jeddah-based bloc, which is the second-largest intergovernmental body after the UN, has generally backed Pakistan and often sided with Islamabad on the Kashmir issue.

According to a Pakistani military statement, Wang, who is also a state councilor, said Pakistan-China relations are based on convergence of views and mutual respect.

He pledged to play his part for further improvements in diplomatic cooperation with Pakistan at all levels, he added.

Wang reviewed the security provided to projects being completed under the China-Pakistan Economic Corridor (CPEC) banner and said China believes in inclusive prosperity.

Wang was first invited to attend the 48th Foreign Minister’s Session of the Organization of Islamic Cooperation (OIC) which was attended by ministers and delegates from 57 Muslim states and international organizations.

Pakistan said China had agreed to refinance $4.2 billion in debt that came due this week, offering major financial relief to the cash-strapped country.

The $2 billion loan from China’s State Administration of Foreign Exchange (SAFE) has been rolled over, the Express Tribune quoted Finance Minister Shaukat Tarin as saying.

Pakistan has repeatedly asked Beijing to refinance the debt and the latest request was made last week to China’s top leaders, according to ministry officials.

Beijing had pledged to the International Monetary Fund (IMF) in 2019 to roll over its debt until the Fund’s program expired.

During Prime Minister Imran Khan’s visit, Pakistan had requested the renewal of $4 billion in SAFE deposit loans that were coming due in the coming months.

Pakistan had requested a total bailout of $21 billion, comprising a total rollover of $10.7 billion of commercial and secured deposits.

These included the refinancing of SAFE deposits of $4 billion and commercial loans of $6.7 billion at maturity.

Pakistan had only $15.8 billion in foreign exchange reserves as of last week and its currency is depreciating rapidly.

Pakistan had also requested to increase the size of the currency swap facility from $4.5 billion to $10 billion, an additional borrowing of $5.5 billion.

The currency swap agreement is a Chinese trade finance facility that Pakistan has been using since 2011 to service its external debt and maintain its gross foreign exchange reserves at comfortable levels rather than for trade-related purposes.

The advantage of this arrangement is that the additional Chinese loan will not be reflected on the books of the federal government and will not be treated as part of Pakistan’s external public debt.

Pakistan had paid Rs 26.1 billion in interest on the outstanding balance at agreed rates.

Last month, the IMF said Pakistan owed $18.4 billion, or one-fifth of its external public debt, to China, which is not only $4 billion higher than official figures, but also the loan the highest of any country or financial institution. .

The IMF has made the $4 billion loan from China to stabilize foreign exchange reserves part of the external public debt from June 2021.

Of this amount, $2 billion fell due but was extended due to Pakistan’s fragile financial situation.

The amount of $18.4 billion is equivalent to 20% of the external public debt declared by the IMF.

It is also the highest amount granted by a country or an institution.

The World Bank’s outstanding debt to Pakistan stood at $18.4 billion at the end of the last fiscal year.

The money Pakistan now needs to pay foreign loans and the cost of imports is also listed at the high end of $30.4 billion by the IMF in its latest report.

According to the IMF, Pakistan’s gross external financing needs are estimated at $30 billion for the current fiscal year and will rise to $35 billion in the next fiscal year.

Pakistan is largely filling its external financing gap through foreign borrowing, with the share of foreign direct investment estimated at just $2.6 billion in the current fiscal year.

The delay in reaching an agreement with the IMF under the 7th review of the $6 billion program could increase the cost of borrowing for Pakistan in addition to delaying budget support loans from international lenders, reported The Express Tribune.

Muslim countries on Wednesday denounced terrorism in all its forms and manifestations while rejecting the attempt to equate the legitimate struggle for self-determination with terrorism.

The Islamabad Declaration was issued at the end of the 48th Foreign Minister’s Session of the Organization of Islamic Cooperation (OIC) which was attended by ministers and delegates from 57 Muslim states and international organizations.

Chinese Foreign Minister Wang Yi was invited for the first time to participate in the exclusive club of Muslim nations.

“He rejects terrorism in all its forms and manifestations and attempts this evil against any country, religion, nationality, race or civilization,” the document reads.

“It reiterates the firm position of the OIC against attempts to equate the legitimate struggle of peoples for self-determination with terrorism,” he said.

The statement also sets out the views of the OIC on the devastating social and economic impacts of COVID-19 as well as climate change on developing countries, calling for a series of concrete actions on vaccine equity, l debt relief, tackling illicit financial flows and delivering climate finance. commitments as well as technology transfer and capacity building.

It also recognizes the growing role of innovation and emerging technologies in driving growth and digital transformation and expresses the common will of countries to promote linkages and partnerships.

The statement expresses the determination of OIC Member States to support “our just causes such as Palestine, Kashmir and others.”

India has repeatedly told Pakistan that Jammu and Kashmir “was, is and will forever remain” an integral part of the country.

He also advised Pakistan to accept reality and stop all anti-Indian propaganda.

India has told Pakistan that it wants normal neighborly relations with Islamabad in an environment free from terror, hostility and violence.

India said it is Pakistan’s responsibility to create an environment free from terror and hostility.

The OIC Declaration aims to unify OIC efforts to address common challenges and capitalize on opportunities, while upholding the rights and interests of Muslim minorities in non-OIC countries.

It pursues a common vision for greater social, economic, scientific and technological development and integration in the Muslim world and beyond.

It reaffirms “our collective will to promote harmony, tolerance, peaceful coexistence, better living conditions, human dignity and understanding among all peoples”.

The declaration contains a proposal to convene a ministerial meeting, later this year or next year, to work out solutions, develop mechanisms and tools to prevent conflicts and promote peace.

It welcomes the unanimous decision of the United Nations General Assembly to proclaim March 15 as the International Day for the Fight against Islamophobia.

He also welcomes the operationalization of the Afghanistan Humanitarian Relief Trust Fund (AHTF), which was operationalized on 21 March.

The statement represents an assessment of global political, security, humanitarian, economic and technological issues and our vision and views to address them.

Foreign Minister Shah Mahmood Qureshi speaking to the media as well as OIC Secretary General Hissein Brahim Taha said that 140 resolutions were adopted at the OIC meeting on challenges facing the world Muslim is facing.