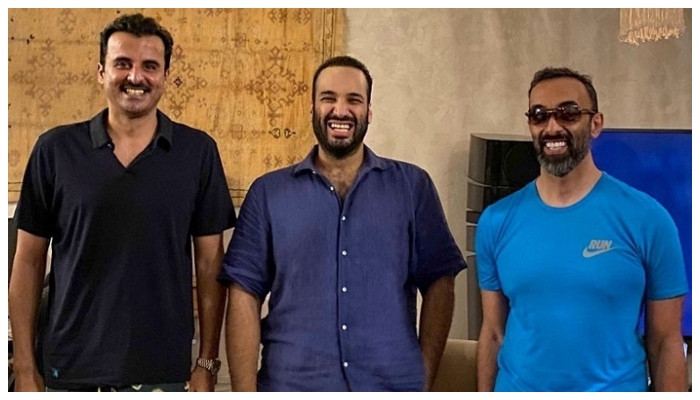 The Saudi Crown Prince’s chief of staff, Badr Al Asaker, posted a photo of the three officials on his Twitter profile.

The meeting discussed bilateral relations and ways to further develop cooperation between the two countries, especially in the economic and trade fields and vital investment projects that serve the process of construction, development and progress as well as the realization of the common interests of the two countries. .

The Crown Prince of Saudi Arabia welcomed the Emir of Qatar to Jeddah on his first visit after the January AlUla GCC statement that restored relations between the two countries.

In January, the Crown Prince met with the Emir of Qatar on the sidelines of the GCC summit. The summit saw all Gulf countries sign the AlUla declaration which Saudi Foreign Minister Prince Faisal bin Farhan said officially ended the dispute with Qatar.

In 2017, Saudi Arabia, the United Arab Emirates, Bahrain and Egypt severed relations with Qatar over alleged support for extremists and Iran. Yemen, the eastern-based Libyan government and the Maldives later joined.

Iran, long at odds with Saudi Arabia, criticized then-US President Donald Trump for paving the way during his recent trip to Riyadh.

The Gulf Arab states and Egypt have long resented Qatar’s alleged support for extremists, especially the Muslim Brotherhood, which they see as a dangerous political enemy.

The coordinated movement, which Yemen and the government based in eastern Libya later joined, had created a dramatic rift between Arab nations, many of which are part of OPEC.