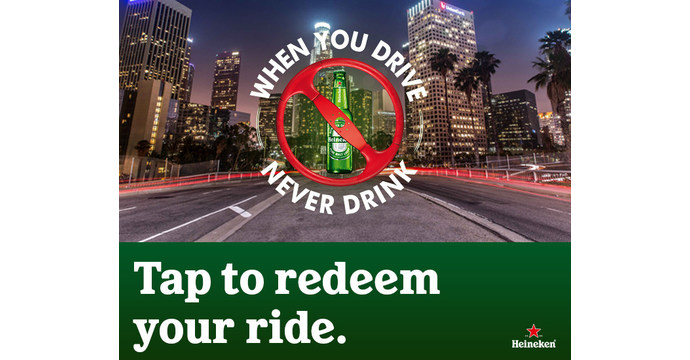 
WHITE PLAINS, NY, May 27, 2021 / PRNewswire / – HEINEKEN United States, in collaboration with Waze, the world’s leading traffic and navigation app, today announced a partnership in the United States to promote responsible drinking. Piloting this summer in California, the campaign uses targeted in-app notifications and offers vouchers from the leading ridesharing app to encourage consumers not to drive while drinking. As a long-time industry leader in promoting responsible drinking, HEINEKEN United States is the first alcohol company to partner with Waze in United States.

Starting on Memorial Day weekend and running throughout the summer, the promotion will be available to Waze users across the state of. California with the possibility of expanding to other markets. The campaign will advocate for moderation by targeting users going to social places such as beaches, parks, sports stadiums and restaurants with messages that remind consumers that there is always a choice and encourage decision making. safe driving. Waze users visiting these sites will be offered a rideshare voucher that they can redeem at any time of the summer for a safe and responsible ride home.

“We like to say that HEINEKEN has been social networking since 1873, but we recognize that bringing people together for a drink is a responsibility. Encouraging responsible drinking is at the heart of our philosophy and at the heart of everything we do, ”said Josephine Bertrams, Senior Vice President and Head of Business Head of Business at HEINEKEN United States. “Our new partnership with Waze in the US is an exciting extension of that commitment. We are working with Waze to encourage people to make safe and smart decisions as they spend well-earned time with family and friends this summer. . “

According to Mothers Against Drunk Driving (MADD), drink driving is still leading cause of death on American roads and although research from the National Highway Traffic Safety Administration indicates that the number of drinking and driving fatalities has declined by 51% since 1982 and by 21% in the past five years, there is still work to be done. . This is why HEINEKEN continues to encourage moderation with its permanent promise to commit 10% of the media spending of its flagship brand, Heineken®, each year to responsible consumption campaigns.

“The past year has been difficult for everyone, and we are delighted to see the progress being made towards a ‘new normal’ for the people of United States,” mentionned Fernando Belfort, Head of Waze Mid-Market for North America. “We want to make sure that drivers can celebrate in the safest way possible and we believe in our innovative partnership with HEINEKEN United States discourage dangerous behavior on the roads. With Memorial Day weekend historically one of the biggest driving vacations of the year, it’s a critical time to remind people on the road to drive safely and responsibly. “

This partnership is based on the principles of HEINEKEN “When driving, never drink” global responsible drinking campaign and adds to HEINEKEN United States growing list of collaborations to encourage better decision making on the go. The company first joined the Coalition Techniques for Effective Alcohol Management (TEAM) in February 2015, an alliance that allows HEINEKEN United States promote messages of responsibility and encourage positive behavior from supporters in sports and entertainment facilities.

Last month, HEINEKEN announced its 2030 Brew a Better World program, an ambitious new set of commitments aimed at positively impacting the environment, social sustainability and responsible alcohol consumption. As an important part of the business Evergreen growth strategy, the 2030 ambitions are based on the progress made since the Brew a better world The program was originally launched in 2009. Partnering with Waze is one of the ways in which HEINEKEN United States will focus on creating a positive impact on responsible drinking in the U.S. market and contribute to the global organization’s commitment to deliver responsible drinking messages to 1 billion consumers each year. For more information on Brew a Better World 2030, click here.

About Waze Waze is where people and technology come together to solve transportation problems. It’s a platform that allows communities to provide road data, edit Waze maps, and carpool to improve the way we get around the world. Through Wazers around the world, Waze is able to partner with municipalities and transit authorities to reduce traffic and congestion, taking advantage of existing infrastructure while having an impact on city planning.

A world with better transportation doesn’t have to be in the distant future. By harnessing the power of community to reverse negative trends in transportation, Waze can create a world where traffic is a thing of the past.