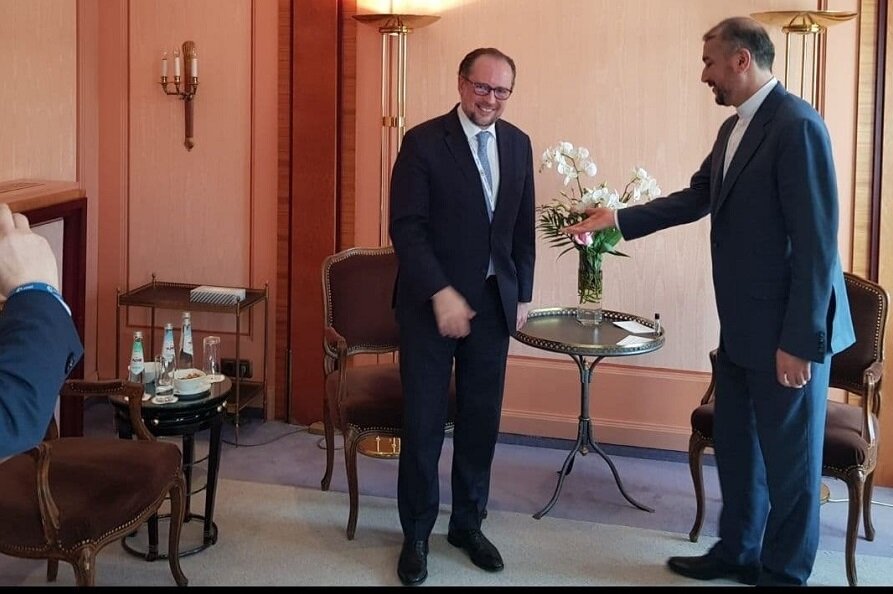 TEHRAN — On the second day of his stay in Munich, Iranian Foreign Minister Hossein Amir Abdollahian met with several foreign officials on the sidelines of the 58th Munich Security Conference.

The two senior diplomats discussed and exchanged views on bilateral relations and some issues of mutual interest during the meeting.

Amir Abdollahian also spoke about the beginning of a new impetus in bilateral relations in recent months after the installation of the new administration in Iran. He then described the continued expansion of parliamentary cooperation between Tehran and Brussels as one of the capacities for developing political relations.

Addressing the impact of the development of economic and commercial relations on the deepening of ties, Amir Abdollahian described as important the functioning of Belgian trade and commercial offices and the maintenance of their activities and said that this indeed contributes to building the future of bilateral relations between the two countries.

The Foreign Minister stressed Iran’s willingness to further develop relations with Belgium in various fields, including technical fields and new technologies as well as knowledge-based businesses. The Belgian Deputy Prime Minister and Minister of Foreign Affairs also welcomed the new meeting with his Iranian counterpart. Sophie Wilmès then discussed the various aspects of relations between the two countries and underlined that the continued development of these ties will have many positive effects in Europe and West Asia.

Ms. Wilmès also underlined her country’s willingness to cooperate in all areas of bilateral relations and to work to follow up on the agreements reached to further develop and expand the ties between the two countries.

During the meeting, the foreign ministers of Iran and Belgium also discussed some consular issues, including Mr. Asadi’s situation. Amir Abdollahian explained Iran’s views on the matter to his Belgian counterpart.

During the meeting, Amir Abdollahian and Hussein discussed bilateral issues and the latest regional and international developments.

The Iraqi Foreign Minister delivered a report on internal developments in Iraq and the post-election situation there, saying his country is ready to host the next round of talks between Iran and Saudi Arabia.

Amir Abdollahian also announced Iran’s willingness to continue talks with Saudi Arabia, however, specifying that this depended above all on the will of the other party.

The head of Iranian diplomacy reiterated the need for a civilian transfer of power in Iraq based on consensus and compromise between all Iraqi groups.

The foreign ministers of Iran and Iraq also discussed economic projects between the two countries and explored ways to implement the agreements reached during the talks between the two parties’ delegations over the past few years. month.

During the meeting, Amir Abdollahian thanked Austria for hosting the negotiations, saying that today Vienna is the center of developments in areas important to Iran and the international community.

He also described Iran’s red lines and Tehran’s strong opposition to any attempt to violate them in Vienna. He said: “If the final choice is between no deal, on the one hand, and violating the interests of the Iranian people – like our red line – on the other, then Tehran’s final choice is to respect national interests and not to cross the logic and the legitimate red lines of the Islamic Republic.

He described establishing and maintaining a balance between rights and responsibilities as the obvious key to the stability of any agreement. Amir Abdollahian added: “Now the Western parties must make their final decision on whether they want to end the current economic terrorism, inaction and non-compliance, or whether they still want to leave the unhealed scar beneath. unacceptable pretexts.

He pointed out that the launch of media campaigns by the three European countries and the United States to achieve their negotiating goals does not affect the Iranian negotiators’ final mission to protect the interests of the great Iranian people.

In other comments, Amir Abdollahian described the centuries-old history of Iran-Austria relations as distinguished, saying the ties have different aspects. He also expressed the hope that relations with Austria will be promoted to higher levels.

The Iranian Foreign Minister also called for resolving consular issues of Iranian citizens in Austria, including issues of families of students visiting their children, extension of residence of some students and some banking issues of resident Iranians. .

Alexander Schallenberg referred to his meetings with all heads of negotiating delegations in Vienna. He said: “The final stages of the talks are very difficult and sometimes breathtaking, and some days progress may not be made, but we all must continue to strive to reach an agreement.” Schallenberg added that although Austria is not a party to the Iran nuclear deal, JCPOA, he is firmly committed to providing all possible assistance to the negotiations.

“There is no doubt that the restoration of the JCPOA and the return of all parties to their commitments is the solution to the crisis created by the former US President and that we are all addressing the issue today,” said- he declared.

The Austrian foreign minister also noted his country’s firm determination to expand relations with Tehran in all areas, saying consular issues can be resolved during discussions between colleagues from the two ministries.

Engaging the private sector in the fight against climate change – Newspaper