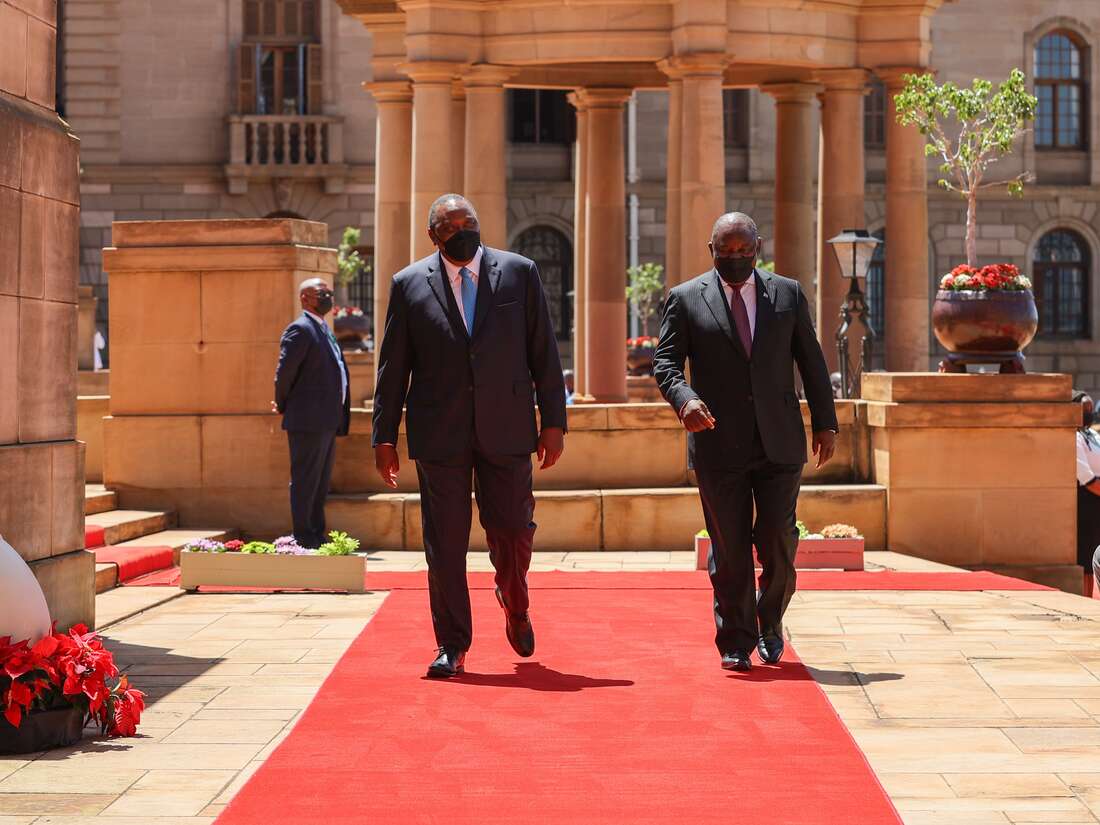 Kenya and South Africa have agreed to set up a technical team to advise on ways to boost trade between the two countries and address bilateral imbalances.

It comes after Kenyan President Uhuru Kenyatta had a meeting with his host and South African counterpart Cyril Ramaphosa on Tuesday in Pretoria.

Speaking to reporters, Kenyatta noted that the two countries have enjoyed diplomatic ties for nearly three decades and that it would be better to redress the imbalances to the benefit of both countries.

He added that “the technical team that will be formed should examine the range of goods and services that South Africa imports from the rest of the world and identify those that South Africa could source from Kenya and vice versa” .

Mr. Kenyatta added that trade and investment remain essential pillars in the bilateral relations of the two countries, although South Africa is one of the main trading partners in sub-Saharan Africa.

On the investment front, South Africa is a major source of foreign direct investment (FDI) in Kenya. Between 2016 and 2019, South Africa’s investments in Kenya increased sharply, from $ 2.2 billion to $ 3.1 billion.

Mr. Kenyatta also said that Kenya is working with South Africa and wants to address imbalances by increasing manufacturing capacity and innovation.

â€œWe can sustainably stimulate the increase in Kenyan exports to your country. We are convinced that we have a wide range of products which would be beneficial for South Africa â€, said President Kenyatta.

During his visit, President Kenyatta and President Ramaphosa witnessed the signing of eight agreements, including memoranda of understanding in transport, health, diplomatic consultation and training, and tourism and migration.

Others were a bilateral air services agreement (Basa) as well as memoranda of understanding on government printing facilities and the return of nationals refused entry and illegal entrants.

The Kenyan president said there are huge opportunities in Kenya under the Big Four program, for private sector investment, with priority areas being investments in universal health coverage (UHC), affordable housing quality, food safety and manufacturing.

These priority areas are designed to deliver good returns and are transformative in terms of added value, job creation and improved quality of life for our citizens.

The two governments also agreed to tackle bottlenecks in the trade and investment regime between the two countries as an important building block to reap the benefits of the African Continental Free Trade Area (AfCTFA ).

Kenyatta said the two governments are already working together to pressure countries in their respective trading blocs to ratify the tripartite free trade area.

â€œI appreciate the progress made so far towards achieving the reciprocal visa-free travel regime between our two countries. This will certainly serve as a catalyst to stimulate trade and investment between our two brotherly countries, for the mutual benefit of our peoples, â€President Kenyatta said.

At the same time, the Kenyan leader commended President Ramaphosa for his exemplary leadership during his tenure as President of the African Union.

â€œThe Africa Office that you led, and of which I was delighted to be a part, established the Common African Continental Strategy for Covid-19 which continues to guide our successful response to the pandemic to this day,â€ said the President. Kenyatta.