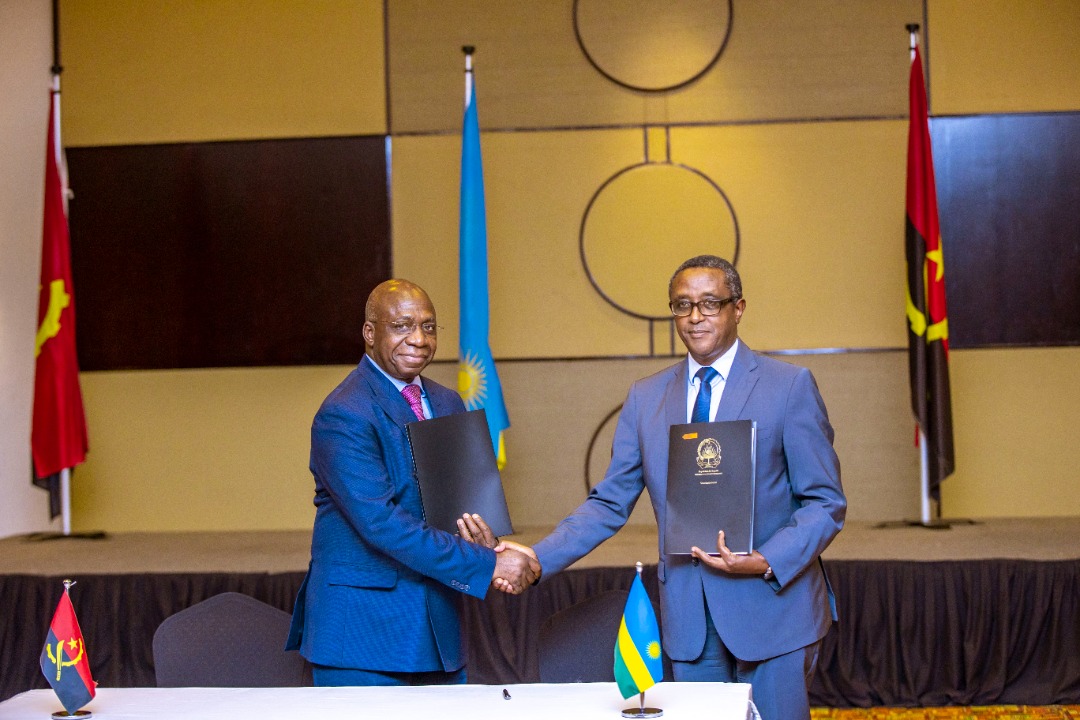 Rwanda and Angola on Friday signed nine different agreements during the first session of the Permanent Joint Commission for Cooperation (JPCC), which will see the two countries cooperate in different sectors including health, energy, education, infrastructure, tourism and justice, among others. .

The first session of the commission was held in Kigali while the second session is scheduled for Luanda in 2024 as the two countries seek to strengthen the ties already existing by then.

The Minister of Foreign Affairs and Cooperation, Dr. Vincent Biruta and the Minister of External Relations, Amb. Antonio Tete, who led the delegations from each side, said after the meeting that the agreements signed will benefit the citizens of both countries.

The two officials said that Rwanda and Angola already have memorandums of understanding for cooperation in the health, justice, agriculture and health sector, but that under the new partnership , new areas of cooperation will include infrastructure, tourism, finance, education, vocational training, defense. and security, among others.

The agreements signed on Friday include the double taxation avoidance agreement, the extradition agreement as well as agreements on mutual legal assistance, transfer of sentenced persons, cooperation in the fields of agriculture and livestock, local government and health, oil and gas.

Similarly, a cooperation agreement was signed between the National School of Administration and Public Policy (ENAPP) of Angola and the Rwandan Institute of Management (RMI).

Dr. Biruta said the first session of the JPCC marked a milestone in the existing bilateral relations between the nations, pointing out that Rwanda already enjoys valuable and strategic ties with the Southern African country.

“Our partnership is based on strong political will and commitment at the highest level to maintain, strengthen and expand our cooperation in various areas such as infrastructure, energy, agriculture, trade and investment Justice”, said Dr Biruta, adding that the new agreements build on the progress that already exists.

Moving forward, Dr Biruta said both countries will have results-oriented action plans and set realistic timelines as well as effective follow-up mechanisms to ensure that the peoples of both countries fully benefit. of cooperation.

“The government of Rwanda is committed to cementing bilateral cooperation with the Angolan government and to working together to address regional and global coordinator challenges affecting our countries,”

“The Covid-19 pandemic has had negative impacts on our countries’ economies and other social aspects and collaboration among African nations is more important than ever, if we are to regain and sustain economic growth and achieve sustainable development. self-reliance of Africa”, he added.

Dr Biruta said that the two countries share common strategic interests including contributing to peace, security and stability in Africa and that the renewed cooperation will provide both countries with an opportunity to leverage the benefits of the African Continental Free Trade Area (AfCFTA).

Minister Biruta praised the mediation efforts undertaken by Angola to bring peace to the Central African Republic (CAR) as well as the country’s contribution to the normalization of diplomatic relations between Rwanda and Uganda.

For his part, Amb. Tete said he was delighted to be in Rwanda with his delegation, which was not only an opportunity to explore ways to strengthen already existing ties, but also a chance to join Rwandans in solidarity then. that they marked the 28and commemoration of the 1994 genocide against the Tutsi.

The Angolan minister said that the genocide was one of the darkest times in the African continent and that countries have a duty to monitor and ensure that what is happening in Rwanda does not happen again anywhere in the world .

“The JPCC comes at a particular time when we wish to write a new golden page in our bilateral relations”,

“There is indeed a renewed and mutual desire to strengthen and expand cooperation in the area of ​​common interest, given the potential of the two countries in the political and diplomatic fields, trade and industry, health, justice, agriculture and fisheries. , economy, finance cultural tourism, to name a few,” said Minister Tete.

He stressed that with the leadership of the two Heads of State of the two countries, Angola and Rwanda will work together to explore opportunities to rebuild and strengthen as the economies of both nations seek to recover from the devastating impact of the pandemic.

He urged the technical teams to speed up the implementation and monitoring mechanisms so that the objectives of the agreement are met, adding that a mid-term review will be carried out to assess progress before the Luanda meeting in two years.

Among other things, he said that during the first meeting, the two countries agreed to remove visa requirements for citizens of the two countries holding diplomatic or ordinary passports, traveling from either side, in order to facilitate travel between Rwanda and Angola, while agreements to avoid double taxation will also boost trade.

Arkansas ranks bottom of report on how it conducts elections