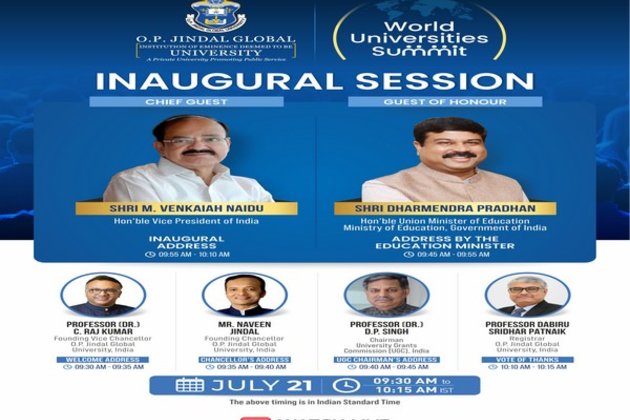 This summit will see 150 opinion leaders from 6 continents and 25 countries. Heads of institutions from over 100 universities will be represented at the summit, including 31 vice-chancellors, 28 presidents-rectors, 21 rectors, deputy vice-chancellors / associates / executive directors / 34 sessions were planned: 27 thematic sessions, 2 special dialogues, 2 distinguished public lectures and 3 opening speeches.

Professor (Dr.) C. Raj Kumar, founding vice-chancellor of OP Jindal Global University (JGU), said: “We are looking forward to this summit which will bring together 150 opinion leaders from over 25 out of 3 countries. days to create very stimulating dialogues. This summit was designed to create a platform for universities around the world to come together to help shape the universities of the future and define the role of universities in contributing to the community, especially during crises. like the current crisis.Moreover, today, at a time when social, political, technological and economic changes across the world have been affected by a pandemic, the entire world faces the crucial challenge of reinventing the role of universities as never before. educational and disciplinary innovations, university research combined with globalization and deeper societal engagement are now changing the very way higher education institutions operate. Therefore, as the world continues to face one of the greatest global crises of our time, it is important that universities around the world come together to find their collective conscience and use their intellectual capital to forge a holistic path. and sustainable to higher education institutions. as well as for the world around us. This summit will also see senior management from several national, regional and international organizations, including Professor (Dr.) Uttam Gaulee, president of the Society for Transnational Academic Research (STAR) network, Mr. Phil Baty, Chief Knowledge Officer, Times Higher Education (THE), Mr. Ben Sowter, Senior Vice President, Quacquarelli Symonds (QS), Dr Lynn Pasquerella, President, Association of American Universities and Colleges, Dr. George R. Boggs, President and CEO Emeritus, American Association of community colleges, Dr Nina Arnhold, Global Head of Higher Education, World Bank.

Over 30 themes will be discussed during the sessions to cover a wide range of topics, including “Virtualizing Mobility: Innovations for the Internationalization of Higher Education”, “Minding the Gap: Rethinking Curriculum, Pedagogy and Assessment amid the Covid -19 Disruption ”,“ On a Road to Equity: University Support System to Promote DiversityInclusion in Higher Education ”,“ Being Glocal: University as a Site of Local Innovation and Meaning Community Engagement ”,“ The Power of Youth: Exploiting the force of students for institution building and community impact ”,“ Breaking the Glass Ceiling: Universities Promote Equality and Train Future Women Leaders ”and“ The Empathetic University: Promoting Well-Being Amid Grief and grievances ”.

The three-day virtual event with world leaders in higher education will help reinvent the “universities of the future” and strengthen their vision and commitment to institutional resilience, social responsibility and community impact.

The facts and fictions about “smart money”