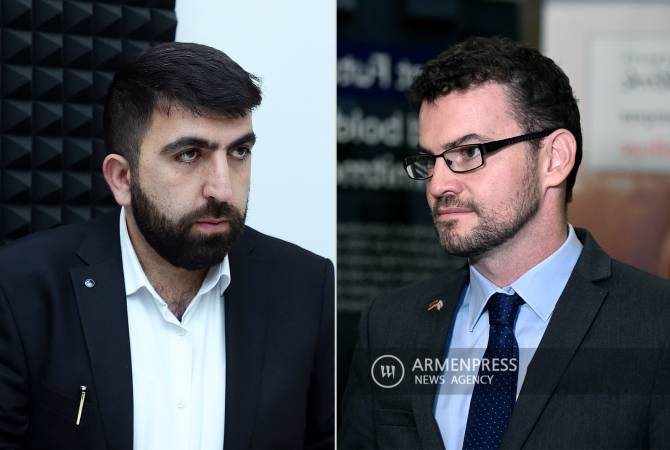 YEREVAN, FEBRUARY 7, ARMENPRESS. The United Kingdom does not regard the Nagorno-Karabakh conflict as resolved and wants a comprehensive peace settlement to be reached as soon as possible, based on the basic principles of the co-chairs of the Minsk Group, the UK Ambassador to Armenia, HE John Gallagher said in an interview with ARMENPRESS conducted on the occasion of the 30th anniversary of the establishment of diplomatic relations between Armenia and the United Kingdom.

Speaking about the history of Armenian-British relations, the work done over the past three decades and the current momentum, Ambassador Gallagher noted the growing ties in bilateral trade and the business sector, in cultural ties and interpersonal, and supporting green development and ambitious approaches to reduce climate change. He also mentioned that the UK government is currently engaging with the Armenian government to finalize a Comprehensive and Enhanced Partnership Agreement between the UK and Armenia.

Aram Sarkissian: Ambassador Gallagher, Armenia and the UK have 30 years of diplomatic relations. But does this short period fully reflect the depth and overall picture of the history of relations between our nations? How would you characterize the current level of relations?

Ambassador Gallagher: Thanks for the question. I agree that the relationship between the UK and Armenia goes back much further than the establishment of diplomatic relations 30 years ago. I am proud that during this period the UK was one of the first countries to recognize Armenia’s independence (at the end of 1991) and was also one of the prominent supporters of the Armenian SSR’s response to the devastating 1988 earthquake – particularly when Prime Minister Margaret Thatcher visited in 1990 and officially opened the Lord Byron School in Gyumri. We have had many ministerial visits since then, most recently when former Minister for Europe and the Americas MP Wendy Morton visited Yerevan and Vanadzor in February last year. I hope there will be similar senior visits in the future.

But, of course, the ties and shared stories between our countries go far beyond government-to-government channels. I continue to be amazed at the number of eminent Armenians I meet who have studied at British universities. There are growing ties in bilateral trade and the business sector, in cultural and people-to-people ties, and in support for green development and ambitious approaches to reducing climate change. So I think there will be many more opportunities for the UK and Armenia to work together over the next few years to forge even closer ties between our peoples and our cultures – for the next 30 years and beyond. -of the.

Aram Sarkissian – Mr. Ambassador, could you please present the interests of the United Kingdom in the relations with Armenia and in this region in general, and what are the priorities of the Armenian-British relations?

Ambassador Gallagher – The relationship between the UK and Armenia encompasses engagement in a wide range of areas, including support for governance and economic reform, bilateral trade, building stronger bonds between people through through cultural and educational connections, and support for green development and ambitious commitments to reduce climate change.

I am pleased that we have been able to support the Armenian government’s reform efforts by sharing UK experience and expertise. I believe this has made a positive contribution to Armenia’s impressive progress in governance and democratization in recent years.

I am also fully aware that the past 18 months have been an incredibly difficult time for Armenia due to Covid and the conflict in and around Nagorno-Karabakh. The UK continues to support the work of the OSCE Minsk Group Co-Chairs towards a lasting peaceful settlement. We have also funded UNDP/UNICEF programs to build stability and resilience in border communities through skills training and psychosocial support.

Overall, I would say that the UK is making a positive contribution to Armenia’s economic and democratic development. We will continue to work closely with government, parliament and the business sector to identify areas where the UK’s experience can make a positive difference.

Aram Sarkissian – How would you comment on the opinions expressed by some experts who say that Armenia and the UK could do much better to realize the great potential, first of all to have a broader legal basis by signing more agreements and other documents (instead of the 9 or 10 documents we have now) in strategic areas and also be more active in the development of bilateral relations? Or is such work already underway?

Ambassador Gallagher – This is something we are currently working on and which I consider an important priority for me and my Embassy in Armenia. The UK Government is currently engaging with the Armenian Government to finalize a Comprehensive and Enhanced Partnership Agreement between the UK and Armenia, encompassing all bilateral issues. We hope to be able to make further announcements on this soon.

Aram Sarkissian – According to the UK government’s Department for International Trade, trade in goods and services (exports and imports) between the UK and Armenia amounted to £64 million ($87 million) as of the second quarter of 2020. in the second quarter of 2021. How can Armenia and the United Kingdom develop? their bilateral trade? Are there any expert studies or projections on how the two countries could boost trade?

Ambassador Gallagher – There is certainly room for further development of bilateral trade between the UK and Armenia. This is something we are actively working towards. Armenia is well known for its booming IT sector, and in recent months we have seen positive signs of corporate interest in expanding operations in both directions.

Another important area of ​​growth is renewable energy. The UK is committed to supporting clean energy and is currently supporting a collaboration with the EBRD and the Business Support Office to identify opportunities to integrate green growth principles into business activities in Armenia. This will contribute to multiple objectives, including preserving the environment, opening up prospects for greener growth and improving the international competitiveness of Armenian companies. UK companies have also engaged with the Armenian authorities on grid modernization and clean energy initiatives with the Municipality of Yerevan.

So I think there are plenty of opportunities to expand bilateral trade – in these specific sectors, and more broadly.

Aram Sarkissian – Are events planned on the occasion of the 30th anniversary of the establishment of diplomatic relations? Are high-level visits planned in the near future?

Ambassador Gallagher – We are planning a series of activities throughout 2022 to mark the 30th anniversary of diplomatic relations. Obviously, the pandemic situation makes it difficult to organize any large-scale event at this time. However, we hope to be able to move forward with the traditional Queen’s Birthday Party event this summer, which will be an important occasion to mark the 30th anniversary of diplomatic relations. I am also looking forward to a visit from the Scottish football team in June which should be a really fun occasion. As for high-level visits, I certainly hope there will be opportunities for senior visitors to come this year.

Ambassador Gallagher – The British position on the Nagorno-Karabakh conflict has not changed. We do not consider the conflict resolved. The UK wants a comprehensive peace settlement on Nagorno-Karabakh to be reached as soon as possible, based on the basic principles of the Minsk Group co-chairs. We fully support the efforts of the US, French and Russian co-chairs and encourage the parties to engage constructively in the negotiation process.

We strongly encourage continued progress on humanitarian issues such as the return of all prisoners of war and detainees, mine clearance and the investigation of all alleged human rights violations. It is vital for the future stability and prosperity of the region that the outstanding issues are resolved through a negotiated and peaceful process.

Aram Sarkissian – How do you assess the negotiation process through Russian mediation towards the unblocking of transport and economic links, the delimitation and demarcation of state borders between Armenia and Azerbaijan?

Ambassador Gallagher – We have no direct control over the processes of the trilateral working groups, but we would view progress in delineating, demarcating and restoring transportation and economic connections as a positive step. The United Kingdom fully supports the development of peaceful relations in the region.

Aram Sarkissian – What is your comment on the new round of Armenian-Turkish dialogue towards normalization, the first meeting of which was held in Moscow on January 14, 2022. What kind of role could the UK play in this process as a important player in international relations?

Ambassador Gallagher – Similar to the previous question, the UK is not part of the negotiations process, but we would positively see any progress towards Armenia-Turkey normalization. From what has been reported, both sides already appear to be taking positive steps towards re-engagement. I believe that actions that allow more contact and cooperation between the peoples of the two countries are a good thing and that the opening of borders offers greater opportunities for both countries to realize their potential.